All connected and contained

Life happens, Emerging from a self contained depressive cocoon. I notice the world is in a phase now where humans themselves must cocoon if at all possible from all walks of life. So I catch up on the news and all social media apps I dare to have installed and notice the world is taking notice and is on a kind of lock down while Covid-19 is dissected and studied. Everyone should practice Social Distancing, even the little sleepy village near the seaside where I reside feels the effects now as schools shutdown and meeting places of all sorts are under restriction. So many people are loosing their minds claiming they shouldn’t drink Corona beer, that if you have darker skin complexions skin your immune, etc. We all I’m sure are hearing and observing so much happening. I passed another story showing how people are emptying the shelves of toilet paper as well, my first thought was poop-apocalypse maybe? I’m learning but I wasn’t aware of one of the symptoms being a proverbial shit storm. The only thing I thought was I will check on family and elders and make sure their ok. I think my moods keep me so dead (sedated) in some ways so I don’t panic I just think and plan the next actions to take. 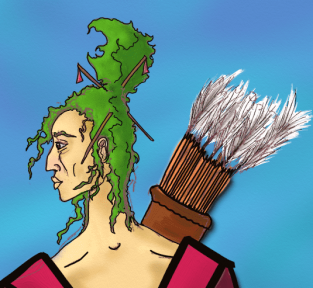 I remember my partner and I were driving home one night in the winter a couple years ago, over a large mountain to get to our home. The roads were icy and it was rather dark. My partner was driving and suddenly hit a patch of black ice, the car started to swerve and there was on coming traffic to contend with as well. Yet in that brief moment which was maybe only a couple seconds we were both calm and composed. As if time had stopped, I think its because most of the time our bodies will enter a heightened state of awareness. He turned the steering wheel appropriately adjusting for the sliding and worked the breaks and accelerator smoothly. He looked at me for a split second I smiled and said you know what to do. After I mentioned this to him, the only thing I thought was to watch out for the other car, and if we end up in a ditch or off the other side splashing into the icy waters to our deaths then I was happy in that moment we were together supporting each other. After he regained control, and alerted the other driver to look out with light signals, I asked him so what do you want for dinner tonight?

This is how I greeted this news of the world seeing maps with countries covered in red with updates about new infections, ads to play the game Plague, inc, because you know humans in times of pandemics or war lets exploit and make some money here. I also saw several news pop-up’s on the side column, people price gouging and hording face mask , hand sanitizers etc. Two albino giraffes were killed in Kenya, a mother and her 7 month old child, skeletal remains were left in the protected area they inhabited. This being my favorite gentle creature and my spirit animal of sorts, I thought I really can’t stand humans sometimes. I have to say not all there’s so much beauty but sometimes the ugly just weighs extremely heavy. I still to this day, don’t understand this idea that we own and should have access to everything. Why was a photo not enough, and to leave them alone etc? Why do others claim to love and respect the other great beings of the planet and then hunt and slaughter them for trophy’s? I thought to myself one day the world will have enough and it will fight back and the human species will exist no more having had a great hand in its own demise. Nature will reclaim the land her resources her life and thrive again. The bindings we all share with everything are so delicate and when they unravel, so do we.

Today just sat a little and doodled digitally trying to get my head out of those spaces, these two popped into my confused mind. I don’t know what their representing the hunter came first and after, I started working on the woman next to him. Maybe trying to offer him life in a sense, showing him that we can utilize without corrupting and killing everything around us. Maybe that’s why there’s roots attached, she will cultivate this flower to grow and flourish maybe producing more. The hunter is receptive, his quiver is full because he wants to appreciate life as well maybe he knows not to take more than is needed. He’s been taught a roll to play, and like with life itself there are many layers. The background is just symbolic of the connectivity of everything and everyone, of life and the environment itself. Whats upsetting is that we see how humankind can’t unite in the face of some things, there have been racist attacks against those of Chinese appearances, news personalities instead of uniting and educating the public, they choose click-baiting demanding china apologize and take blame and as we all know it just keeps the narratives of us vs them alive and well. Which has never and will never help the species as a whole.

On a rather positive note for most socially awkward, depressed, agoraphobic, computer nerds like myself who love movies and being locked away in our little caves, social distancing is what we know all to well. Also I hope maybe some families are reconnecting during this time and finding each other again, being their for each other and their communities.

Yoda would tell me self hate is strong with this young padawan. Lol I also binged a great deal of my Science fiction films etc. Why… is that because generally the human species in these stories has evolved past racism, consumerism, tribalism, hating each other, greed, and so much more, and learn to function with their environments and use only what is needed. That was my Aha moment for today, why I love this genre of films books etc. Ok I’m still getting energy back so I’ll stfu for now because well silence is golden sometimes.

I’ll just appreciate the weather currently, woke up to dusky Grey sky’s and scenery, then cloudy with some rain, then clear blue lightly cloudy sky’s with sun beams dancing across the earth. Then around mid day it was sunny warm with some clouds and then suddenly fluffy snow flakes, dotted with some hail that began pelting down on everything and rain again and now in the evening its dusky Grey with snow and rain mixed and completely silent outside. So I’m smiling , my mind is a tornado never at rest and its seems the weather is not either. Oh and while taking the electric car to the store a huge Sea Hawk flew directly over the car and it was amazing, I wanted a photo but I was driving and I slapped myself mentally and said just (expletive) F’ing enjoy it here and now, because we are not promised tomorrow.

On a lighter positive note, I’ll insert this little video my partner took of me a few years ago when we were trying some DIY remodeling and removing a wall. I like the symbolic nature of tearing down walls and borders. Sometimes we have to find fun and smiles and laughs where we can, even if its at ourselves.