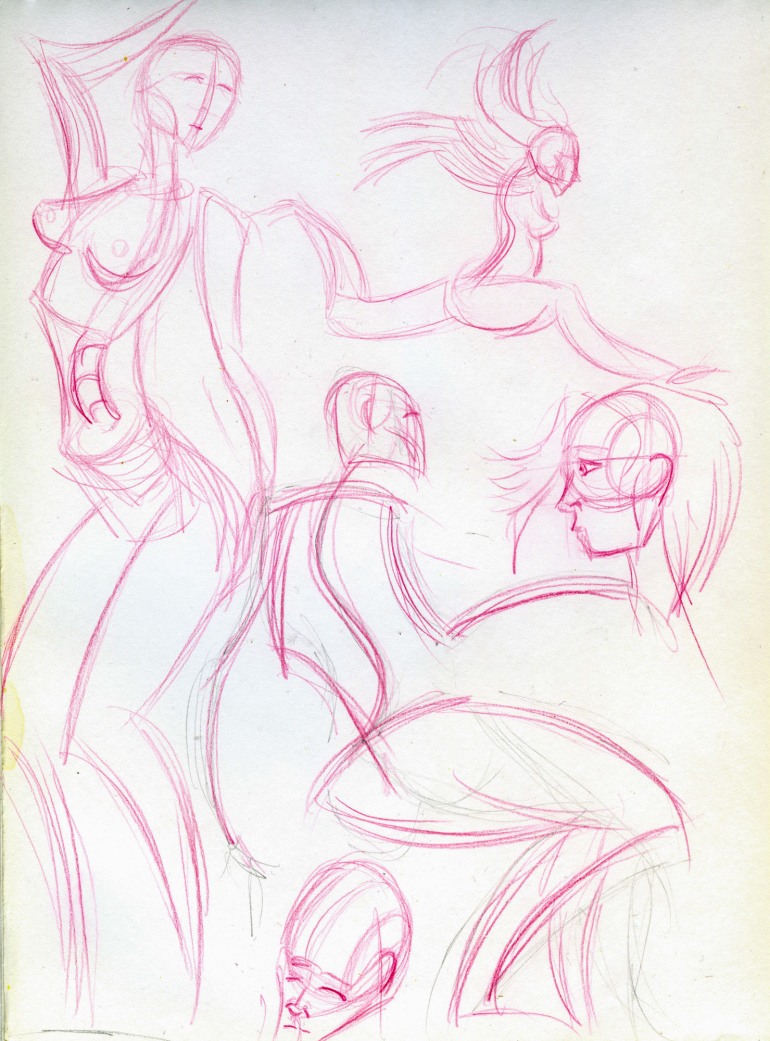 Went back to basics for sketching just playing with movement and form and expression. I would say I hate it, but I honestly don’t it’s fun reverting to a proverbial playground and just being free to explore without boundaries, complications, rules, politics, etc. When things feel or become so complex its nice to go back to the foundations and start to root out the problems from the ground up.   Currently I as well as many are so upset at a few corrupt and unscrupulous individuals not governing for all people but instead governing for their own personal and small private groups interest. It would be wonderful if people could put aside their differences and learn to handle difficulties in more humane and civilized ways, but this seems not to be the action first chosen. Instead its carnal and animalistic pack mentalities that win out.  They think in terms of I want, and we want, what we want and screw everyone else.  The complexity of nature and the universe beautiful, the complexity of the human species debatable.

We all have carnal and selfish desires its part of the human experience but there’s also a fine line in how they are implemented.  My destructive and violent tendencies I release in gaming, not with toxic chats or interactions with humans but against digital computer controlled environmental characters.   In the real world I respect and treat others with compassion empathy and understanding. In my gaming I love explosions and incendiary things. Does this make me better or worse for allowing some carnal release in gaming?  Is that virtual carnage even important, perhaps a later discussion? Control of these feelings urges makes us human and willing to be part of the sect that wants to progress society and the human species. At the end of the day what is the hate and divisiveness of others, besides a bid for control of something they have no control over initially, to attain power of some sort.  How much better could our species be without lines drawn between sexes, man made concepts like race, currency, etc. I mean I have won many debates with some who wanted to point out superiority of one group of people over another. How did I win some of those discussions with the most simplistic observations?  BUNNIES! I and no one to my knowledge, has ever observed the little white bunnies subjecting the little brown, grey, black, multicolored bunnies segregating on pigmentation of the skin and fur. They all play and exist with common goals, shelter, food, safety, a good life. The same applies for many species. It just humans with their so-called great understanding of life and consciousness of our existence etc. We seem to frack up the simplest things so easily.

We use our consciousness, except for those that are not allowing themselves or able to wake up. They use it for excessive wars, destruction, separation us vs them mentalities. I say excessive because there are times when we must engage our baser needs to help or save another who is being unjustly detained, harmed, exploited etc. Every knowledgeable person has the capacity to realize the good and rebirth that can come from some types of destruction. But what were all observing in the world now is this wave of exploitation and personal growth at the cost of the masses. That cost is to high to maintain and always suffers in the end. The universe constantly evolves and if humankind refuses to evolve it will cease to exist, all the beauty and advancements will mean nothing as they are swallowed whole with nothing to carry on their memories, religions, and histories.  They become instead nourishment for something new something more something better. In a sense I feel humans are still on the cusp of our foundations our lines, we have not even begun to scratch the surface of the details to come later. The lines we create are beautiful, and yet always incomplete.