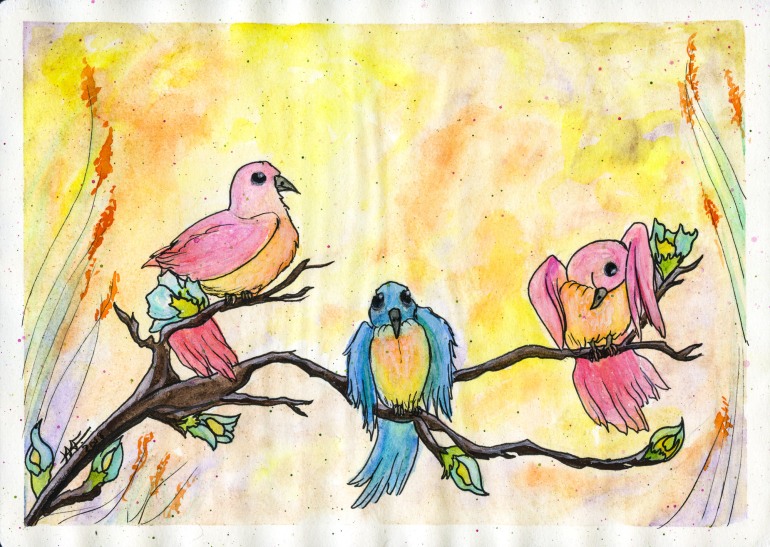 Void of thought and sounds.

Walked out of the house today and felt and heard nothing, no birds chirping or wind howling, as if the world had stopped completely. Beautiful and eerie all at the same time, it leaves a fertile playground for you to question yet again the meaning of it all. This doodle was created thinking of the birds sitting in the trees shushing each other and watching the human below struggle to hear the tree falling in the forest, or to hear their nonexistent song. So many things happened this week, positive and negative; spoke with family and friends, they are all healthy and doing well. I also kept up with the reporting from the rest of the world.

I learned about the people that live on an island just outside India’s shores. It’s a protected area where no one is permitted to go. The natives are hostile to outsiders, with good reasons when you delve into their history and learn of individuals such as Maurice Vidal Portman who went there in 1880. Removing (capturing) an elderly man, a woman, and 4 children. The adults died after shortly after their capture and the children were brought back later with “gifts” to let the other tribesmen know the foreigners were ok. These people are in the public eye because of an individual John Allen Chau who recently perished attempting to bring Christianity to the islanders. I don’t know if he considered he could be bringing them death in the form of illness’s they might not have immunities to. I value all life, but like most people I was upset by the circumstances of his death and upset by the religious indoctrination that gave him the will to trespass where he thought his god gave him strength to do so. I’m also upset at the ego of this venture to impose a set of beliefs upon people without knowing anything about them, their beliefs, their lives, and what they desired.  We have so much information today, we can access and learn from our history, the effects of religious crusades, colonialism, wars etc. We’ve seen, and some of us lived through, the effects of these events, however misguided they were and are at times.  I guess if you must break it into camps, I’m of the camp that says leave these people the hell alone. I truly hope the Indian government continues to do so, they have a wonderful opportunity to keep them protected from the outside world with its diseases, corruption and so-called modern society. Let them have their happy bubble I guess is what I’m thinking since the rest of us still haven’t figured out a perfect balance to this modern world we’ve created.

This week is also extremely difficult because of new information around the grievous situation in Yemen and how reports say that more than 85,000 children may have died from starvation and disease, because of the war we adults wage, something children have no say in. I have no words, these are children, beautiful children, suffering and dying. What will it take for people to stop warring? If I believed in the existence of an all-knowing deity, I would pray that it would take my life to save all the innocent children.

UGH! Some days I feel like hating life because it can seemingly be without rhyme or reason. The luxury of stepping outside your house, where little is happening, and you can ponder your existence in peace is something I have a hard time accepting at times.

Another thing that is rather upsetting and that I learned this week was a post on Instagram with poetry and art.  It spoke about the human experience through creativity. One man shared his experience with cutting (inflicting self-harm), he described his journey in a positive and hopeful way and was shedding light on something most are unaware of. There was no glorification of cutting in his post, it was raw and vulnerable and enlightening. Instagram deleted that entry. Some had flagged it, or it made them highly uncomfortable. So now its deleted possibly doing even more harm. We cannot only look to the right where things are beautiful and shiny and new, all the while avoiding the left where things are a little uglier, raw, and smack us in the face with the realization that life is complicated and nuanced. Driving us to make a positive effect where we can to improve things. Meanwhile if any of us take a couple of minutes we can immediately find so much hate and vile imagery on Instagram that’s still present.

I would surely fail this dance of life if it wasn’t for others in this world sharing their experiences and lives, trials and tribulations. The knowledge of so many lives finding a way to make it work is fuel to not give up. It’s still a shame that shaking your ass is so much more appreciated than sharing personal struggles.